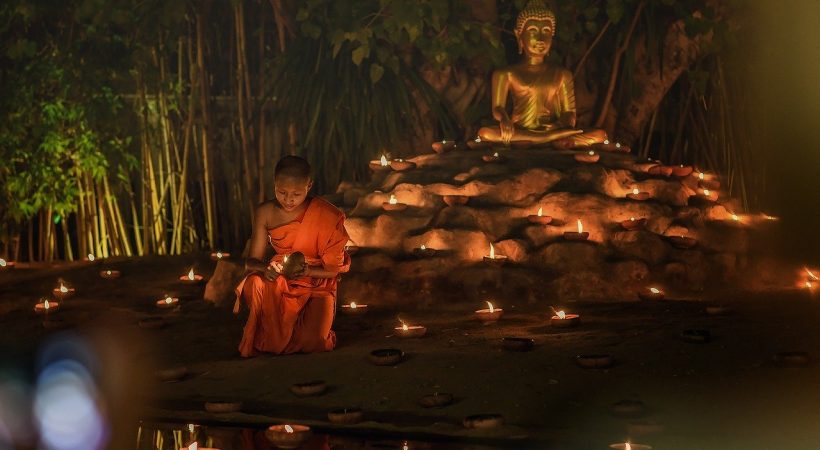 “Buddha is not only a name but a sacred thought. A thought that beats in every human heart, guides the humanity. Buddha is ultimate limit of sacrifice and devotion’ Prime Minister Narendra Modi said in his keynote address at the virtual Vesak global celebrations marking Buddha Purnima on Thursday.

Buddha Purnima, this year is being celebrated virtually due to Covid-19 pandemic. The event is being organised in honour of the victims and the frontline warriors of Covid-19.

“Buddha is the one who burns and exhausts himself by sacrificing self,committed to spread happiness around the world.We are witnessing several such people around us who are working round the clock to serve others, to nurture the sick, to feed the hungry.” The PM said.

Recalling the teachings of Lord Buddha, The Prime Minister said, “Lord Buddha had said that the mind is supreme, and is the basis of Dhamma, that the mind is at the forefront of all the tendencies. That’s why, since our minds are connected, we don’t feel the lack of physical presence.”

The birth anniversary of Gautam Buddha, the founder of Buddhism, is celebrated asBuddha Purnimaor Buddha Jayanti which falls on the full moon day in the month of Vaisakh (April/May) according to the Hindu calendar. This yearBuddha Purnima is being celebrated on Thursday (May 7).

In Theravada Buddhism, it is also observed as the day when Buddha, born as Prince Siddhartha Gautama (c. 563-483 BCE) attained Nirvana (salvation) under the Mahabodhi tree at Bodh Gaya, Bihar, as well as his death anniversary. The Vesak full moon day is the most important day in the Buddhist calendar.

Buddha Purnima is a major festival celebrated with great pomp and fervour in countries like Sri Lanka (where it is called Vesak), India, Nepal, Bhutan, Burma, Thailand, Tibet, China, Korea, Laos, Vietnam, Mongolia, Cambodia, Singapore and Indonesia. In Sarnath, Uttar Pradesh, a major Buddhist pilgrimage site where Buddha is said to have delivered his first sermon after attaining enlightenment, relics of Buddha are taken out in a procession. Many Hindus also believe Lord Buddha is the ninth incarnation of Lord Vishnu.

This year, however, the celeibrations may be just virtual due to the Covid-19 lockdown.

According to ancient Buddhist history, “Soon after Buddha achieved enlightenment, he gave his first discourse called Dhammacakkappavattana Sutta or Turning the Wheel of Dhamma, to five ascetics in the deer park at Isipatana in Benares (present-day Varanasi). These five ascetics became his first disciples and his teachings attracted many followers, who then joined the Sangha, the community of monks. Lord Buddha thereafter visited his ailing father to preach the Dhamma. After hearing his teachings, the king attained arahatta (perfect sanctity) before he passed away. This was followed by The Buddha preaching the Abhidhamma or the Higher Doctrine to his former mother, who was reborn as a deva with other deities in the Tavatimsa heaven. He then founded the order of Buddhist nuns. During his long ministry that lasted forty-five years, Lord Buddha walked throughout North India, and taught about the suffering of life, how to end it, how to attain peace and nibbana, to all those who listened.”

Some of the teachings of Gautam Buddha:

“It is better to conquer yourself than to win a thousand battles. Then the victory is yours. It cannot be taken from you.”

“If you knew what I know about the power of giving you would not let a single meal pass without sharing it in some way.”

“Learn this from water: loud splashes the brook but the oceans depth are calm.”

“You only lose what you cling to.”

“The past is already gone, the future is not yet here. There’s only one moment for you to live.”

“The trouble is, you think you have time.”

“Your work is to discover your work and then with all your heart to give yourself to it.”

“Believe nothing, no matter where you read it, or who said it, no matter if I have said it, unless it agrees with your own reason and your own common sense.”

“The tongue like a sharp knife… Kills without drawing blood.”

“Teach this triple truth to all: A generous heart, kind speech, and a life of service and compassion are the things which renew humanity.”

“We are shaped by our thoughts; we become what we think. When the mind is pure, joy follows like a shadow that never leaves.”

The Ministry of Culture, in collaboration with the International Buddhist Confederation (IBC), a global Buddhist umbrella organisation, is holding a virtual prayer event with the participation of all the supreme heads of the Buddhist Sanghas from around the world, a statement from the government said.