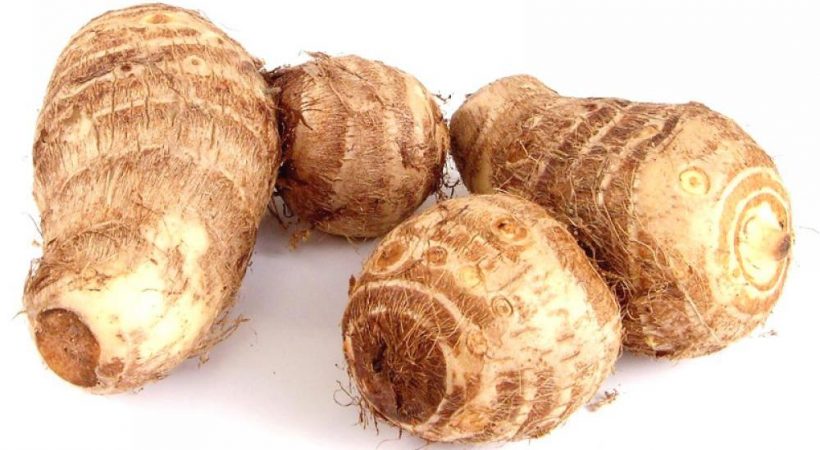 As a tropical and semi tropical root Colocasia (arbi or chaemb) has been largely cultivated and consumed mostly in the southern parts of India since ages. Being delicious and nutritious in nature, the households of this region, even in this fast food era, are still quite fond of  Colocasia and include it  as a  main item in the daily menu.

There are different types of Colocasias and Taro (Colocasia esculenta ) is commonly consumed one and in itself the new leaf of Taro is the   most popular one. Milk Colocasia is also in demand and the root and leaf of it are edible. Some more varieties of Colocasia also found in tropical regions.

Colocasia contains over 70 per cent water and 21 per cent starch. It can be safely consumed when the cholesterol level is at peak as it contains no fat. It has 3 per cent Protein and 1.7 per cent minerals, which  makes it more nutritious. Calorie is 97 and it also got 1 per cent fiber.

In Ayurveda, Colocasia is called Alooka and its properties are simultaneously ardor and cool. As described in Ayurveda Colocasia soothes the pitta dosha which causes diarrhea, burning sensation, skin irritation, odorous sweating, fever, inflammation etc. It is not recommended at the time of gastric problems.

1. As it is saline in nature it relieves constipation. Its heavy content makes it indigestible in some cases so Ayurveda recommends releasing the water before cooking and it also recommends preparing it with ghee. In South India, Colocasia is usually prepared mixing with buttermilk which makes it easily digestible.

2.It is proved that taking Colocasia reduces depression and anxiety. It also energizes the body and mind.

3. As it contains zero fat, it can be safely taken while cholesterol level stays high and it is very beneficial for heart.

4.The beta-Carotene, Calcium and Magnesium contents  make it capable of  lowering the risk of premature ageing.

5.It is very beneficial for those who want to gain some extra weight as the starch content in it helps to gain weight fast.

6.It is very rich in Vitamin E therefore beneficial for hair health.

7.Sodium, potassium, magnesium contents in it help regulates blood pressure. Rich in Vitamin A, it makes it beneficial in keeping eyes healthy.