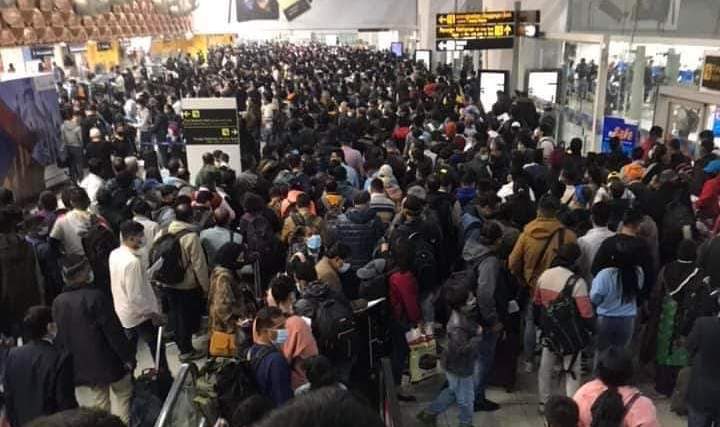 The crowd at Indira Gandhi International Airport in Delhi Sunday

The Delhi airport on Monday announced that it updated testing capacity at international arrival with deployment of 120 Rapid PCR machines, taking hourly capacity to 500-600 per hour with a TAT of less than 60 minutes.

Further, there is provision for approximately 500 RT-PCR tests per hour. This additional capacity will further smoothen the international arrival process.

Following the visit, he said that 35 rapid RT-PCR testing machines are functional within Terminal III of the airport.

“With this, passengers screening and testing time can be reduced to even 30 minutes,” tweeted Mandaviya.

The new variant of COVID-19 was first reported to the World Health Organisation (WHO) from South Africa on November 25. According to the WHO, the first known confirmed B.1.1.529 infection was from a specimen collected on November 9 this year.

On November 26, the WHO named the new COVID-19 variant B.1.1.529, which has been detected in South Africa, as ‘Omicron’. The WHO has classified Omicron as a ‘variant of concern’.Dozens of countries have imposed travel restrictions on the southern African nations since the mutation was discovered.