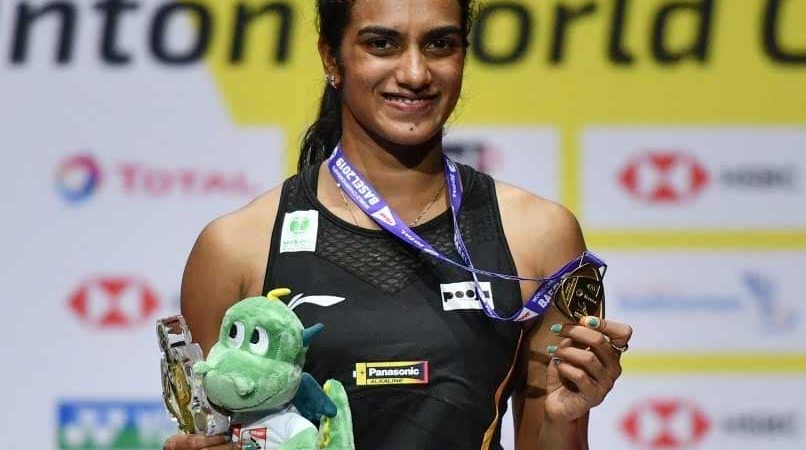 Badminton ace PV Sindhu made history on Sunday becoming the first Indian to win the World Badminton Championships 2019. Surprisingly she has beaten her familiar rival at many battles, Nozomi Okuhara of Japan.  She defeated Okuhara in the final played at Basel in Switzerland.  From the beginning,  Sindhu was in full control of the match. She won the final in straight sets,  21-7,21-7 in just 38 minutes. It was also a sweet revenge against Okuhara who sent her packing with a heavy heart winning  the gold at Glasgow final two years ago after an epic fight that lasted for an unusual 110 minutes.

Sindhu played a brilliant game from the opening and never showed any nervousness throughout the fight. Every shot she sent was filled with confidence  that put Okuhara in utter confusion and distress.

Sindhu, the 5th seeded and silver medalist in the Rio Olympics  was determined to win the gold against the 3rd seeded Okuhara.

This is for the second time that Sindhu defeated Okuhara this year. Earlier she had defeated the Japanese in the  Indonesia Open 2019.

Sindhu, who had defeated the World No.1 Tai Tzu Ying, in the quarter final, continued to display her  mastery over the game and easily dismissed her opponent to become the world champion. This was her 5th world championships.

Apart her silver in the 2016 Rio Olympics, she was  also the winner of a silver at Gold Coast Commonwealth Games, Asian Games, Jakartha and the BWF World Tour finals last year.