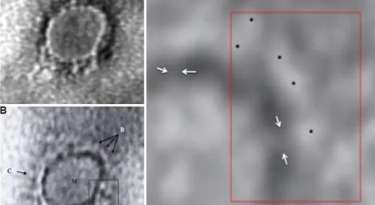 Pune: The first electronic microscope picture of the COVID-19 virus that was taken in India was released recently. This picture was taken by a team of scientists of the ICMR NIV (Indian Council of Medical Reseach, National Institute of Virology) using a transmission electron microscope. It was later published in the Indian Journal of Medical Research too. This image was taken using the samples from the first coronavirus positive case of the country that was reported from Kerala.

This case was reported on January 30 and was confirmed after examining the sap taken from the throat of the infected which was later sent to the Virology department of the Pune institute. The confirmed case was a Kerala medical student from Wuhan. The gene sequencing for the SARS-COV-2 virus that caused COVD-19 was done for the first time in India using this sample from Kerala.

It was later discovered that this virus matched by 99.98% with the virus that broke out in Wuhan. Also, on comparison, it was found that it looked a lot like the coronvirus that broke out in China. The research paper that gave details about the electron microscopic image of the virus was prepared and written by the head of the Electron Microscopy department Athanu Basu and his team at the National Virology Institute of Pune.