Gryfino: the town of crooked trees 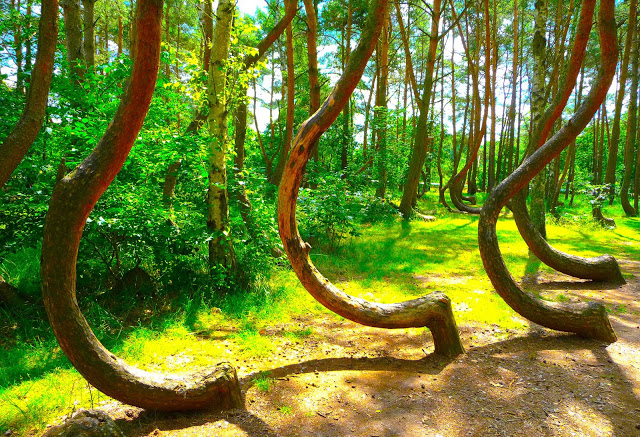 Gryfino is a small town is a town in Pomerania, northwestern Poland which was attacked by the German army during the Second World War. With around 22,500 inhabitants, the town is quite an important place in the tourist map of the world.

The Crooked Forest of Gryfino is a world famous tourist place which, as the name suggests, have trees which are crooked at the base. Around 400 pine trees in the forest are bent towards the north at the base. All the trees have a bent of almost 90 degrees at the base some trees are bent to almost 3-9 feet. There are no scientific explanations for this and whatever information was there about this forest and the trees in it, it was destroyed in the Nazi attack.

There are quite a lot of bent trees all around the world. But a set of 400 trees, all bent in the northern direction is a peculiarity of Gryfino. These trees are believed to have been planted in the 1930s. The bend was first noticed after 7 or 8 years after the trees were planted. There have been many studies about these trees but no proper explanations have been given yet. There are group of researchers who believe that some kind of instrument was used to bend the trees in this fashion to make it apt for the manufacturing of certain kind of furniture.

There is another group of researchers which claim that heavy snowfall caused this bend but there are no proofs for any of these claims. Although no claims have been proved, the tourist flow to this place cannot be denied.