How to practice Hatha Yoga and the health benefits 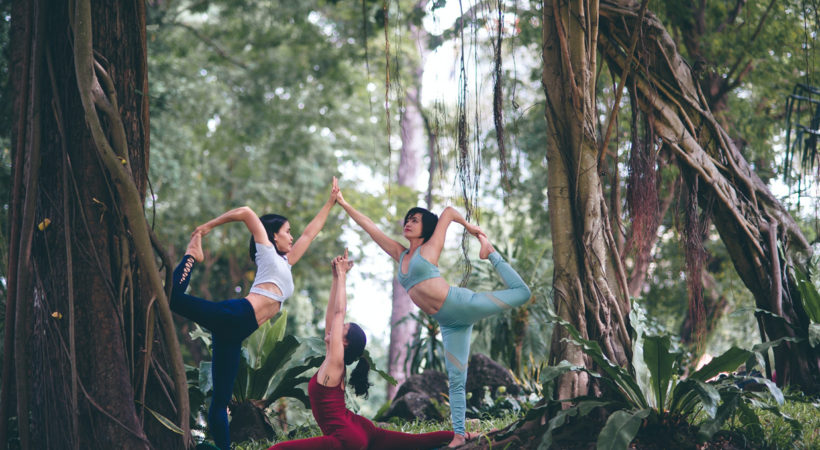 Hatha Yoga is one of the most popular styles of yoga and has a long history from its ancient origins to the modern-day practice. But what, exactly, is Hatha? A look at  what benefits does it provide, and what can you expect if you attend a class

What is Hatha Yoga?

Traditionally, Hatha Yoga is a catchall term for any type of yoga that pairs poses (“asanas”) with breathing techniques (“pranayama”). Essentially, many of the yoga styles that are popular in the US—like Ashtanga, restorative, Vinyasa, Iyengar, etc.—fall under the umbrella of Hatha.

At the same time, the term “Hatha” has also evolved in the US to describe a particular type of yoga class that’s typically slow-paced with a focus on proper alignment, explains Lisa Maria, national workshop director at YogaWorks (US) and certified yoga instructor.

What’s the difference between Hatha Yoga and Vinyasa?

Compared to Vinyasa classes, which often flow through series of poses at a quick clip, Hatha classes typically guide practitioners through postures at a slower pace with more guidance on how to do each pose correctly.

What are the health benefits?

There is some research that focuses specifically on the benefits of Hatha, though most of those studies define Hatha using the umbrella term (i.e., yoga that combines poses and breathing techniques) rather than specifying it as yoga that’s slower-paced and focused on alignment. With that caveat in mind, those studies suggest the broad category of hatha yoga may have a variety of benefits, including:

And beyond these studies, there’s a ton of research on the benefits of yoga in general, including data that suggests its ability to treat pain, lower BMI and blood pressure, reduce menopausal symptoms, help manage chronic diseases, improve mental health, and more.

It also can impact your endurance. “Yoga makes you very movable and very capable. You get to be strong in not just one direction, but everything you can imagine doing in every direction without tiring,” says co-founder of Strala Yoga Michael Taylor in mbg’s Complete Guide to Yoga class.

The specific format of a Hatha Yoga session will vary from teacher to teacher and class to class, but usually, classes begin with some sort of “centering exercise,” says Maria. This might be in a seated position or on your back and may involve a simple guided meditation, a breathing exercise, or even just a moment of silence, she says.

From there, the teacher may guide you through a series of movements (think twisting, bending, folding) that build toward a “peak pose.” Then, once you achieve that pose, you may do a series of movements to counterbalance some of the previous poses from class, to make sure you leave feeling “balanced,” says Maria. Or the class might not be centered on a “peak pose” at all and instead could incorporate a variety of postures like standing poses, reclining poses, balance poses, and twists.

Hatha also focuses on breathwork timed to movements (typically at a slower pace than what you might experience in Vinyasa), and classes could include meditation and chanting as well, adds Maria.

No matter what format your Hatha class follows, know that you don’t have to do every single pose, and you also don’t have to hold poses for as long as the instructor says. It’s more than OK to break poses early or even opt out completely and simply sit or stand quietly. “You can take a break anytime you need to,” says Maria.

On the equipment front, a yoga mat is your only must-have.

Pro tip: If you buy a brand-new mat, wash it at home first before taking it to class, says Maria. Why? “Most mats have a factory coating on them that’s slippery,” she explains, which means that if you use it straight from the store (or box), you’re likely going to slide around.

Hatha is great for beginners and more experienced yogis.

Because Hatha tends to be a slower form of yoga with a greater emphasis on pose instruction (versus simply performing them), it’s a great type of yoga for beginners.

Hatha could also be good for anyone who has a difficult time focusing, adds Maria. “Poses tend to be broken down, so your mind can’t wander as much,” she explains. “You get brought back to an action over and over again.”

As long as you’re in reasonably good physical condition, you should be well-suited for Hatha, says Maria. That said, if you have certain health conditions (like a risk of blood clots, a herniated disk, glaucoma, etc.), chat with your doctor before giving Hatha a go.

Hatha is great for a wide variety of people—especially beginners—as you don’t need much prior knowledge or experience to hit the mat.

Tags: How to practice Hatha Yoga and the health benefits
Related -