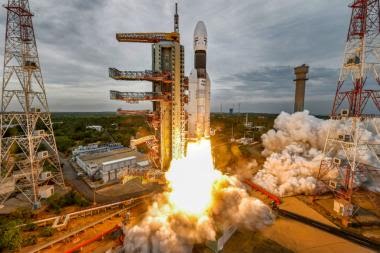 India is in the zenith of joy and pride, rejoicing in the successful take off of the ambitious lunar project Chandrayan 2 from Sreeharikkotta and not just the Indian community, but also the international community applauded the achievement. It was indeed a proud moment for the country when India was applauded for being the only country that targeted the south pole of the Moon.

Most of the newspapers around the world reported the event and in India, the news was widespread making the event quite popular. The recent days saw posters of Chandrayan 2 and mini replicas of Chandrayan 2 being made by students fusing various day today items and it was indeed celebrated at all schools. Many do find that the project is ambitious and the international scientific community and defense experts are looking forward to the results of the project. Media has given a significant coverage to the event and many of the media platforms have covered it elaborately.

India is the fourth country being a member of the Lunar Expedition in which the US, Russia and china were the first three. The project costs almost 978 crores of Indian rupees and was initially scheduled for the 15th of July and due to some technical snag, it had to be postponed to Monday. The ISRO chief Dr. K Sivan expressed his joy and appreciation for all those who are a part of the project and also explained that it was a technical snag that resulted in the rescheduling of the launch.

Vikram, the Chandrayaan-2 lander will make a soft landing near the south pole of the moon. The landing is expected to be between two craters known as Manzinus C and Simpelius N.  Vikram would study the shadow area region and this would indeed be mile stone in the space research history of India. This spot was particularly chosen for the study as the first Chandrayan project found a conclusive proof for water in the lunar soil, rocks and atmosphere.