Israeli PM  asks people  to do ‘namaste’ while greeting others 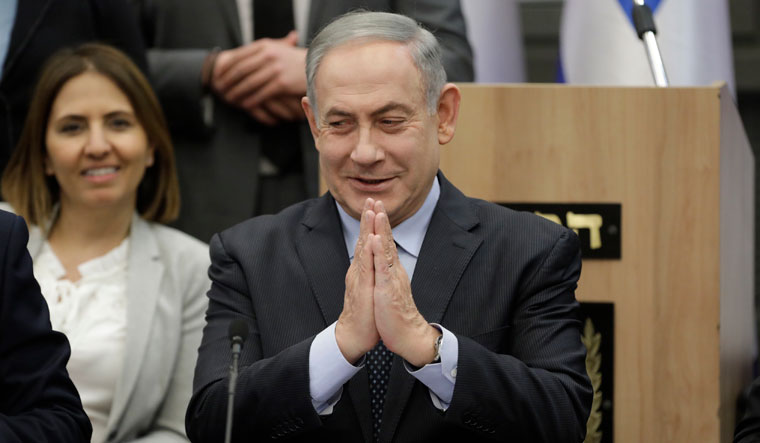 Israeli Prime Minister Benjamin Netanyahu on Wednesday encouraged his countrymen  to do ‘Namaste’ instead of shaking hands as one of the measures to prevent the spread of the deadly coronavirus, Press Trust of India (PTI)  reports from Jerusalm.

Israel has 15 confirmed cases of the virus but no deaths, with some 7,000 others in home-quarantine.

Netanyahu  said this at a press conference following a review meeting  on the spread of the killer virus in his country. He encouraged people  to avoid the normal handshake while greeting people and replace it with other forms of greetings like the Indian ‘Namaste.’

He has  also demonstrated how the Indians do ‘Namaste’ while greeting people.

The Israeli PM said that “we are in the middle of a global epidemic,” but Israel has done well as it was quick in taking action to prevent the spread of the virus in the country.

Health Minister Yaacov Litzman announced a ban on public gatherings of more than 5,000 people.  He has also asked people to refrain from any unnecessary foreign trip, PTI reported.

Tags: Israeli PM  asks people  to do ‘namaste’ while greeting others
Related -