Let’s sing along with him … 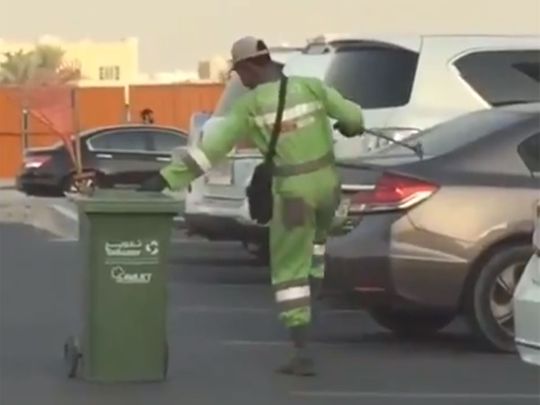 A garbage worker in Abu Dhabi  who sings and dances amidst  his work in the hottest climate  to overcome his discomfort  has become  the hero of the day  recently  when a passerby amused by his extraordinary sincerity and high spirit,  shot his performance  and  posted it on social media. Within no time it went viral. Over three million people watched the video and 4500 people shared it.

Abu Dhabi, the capital of the UAE is extremely hot these days when hardly anybody dares to come out on the street.  But here, this guy is not influenced by the adverse climate and doing his work without any complaint and that also thoroughly enjoying what he is doing.  When noticed he simply danced for the others too.

It was one of the native women who capture this once in a blue moon show and posted it for the public..  Everybody who watched the video unanimously praised him for the sincerity he showed during his duty time.