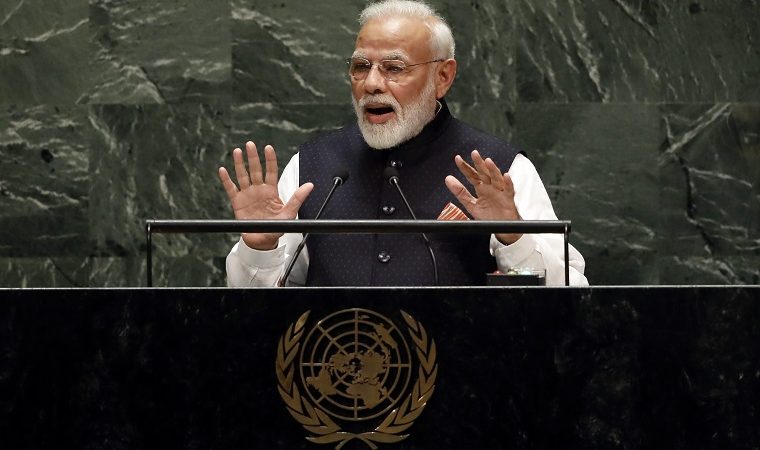 After the glittering success at ‘Howdy, Modi’ in Houston and receiving the much coveted “Global Goalkeeper” award by the Bill and Melinda Gates Foundation for the grand success of the Swachh Bharat Abhiyan (Clean India Campaign), Prime Minister Narendra Modi last Friday joined the world leaders attending the 74th session of the UN General Assembly.
Prime Minister Modi began his historic speech at the Assembly reminding the august audience about the relevance of Mahatma Gandhi’s message of truth and non-violence.

“It is a very special occasion, also, because this year, the entire world is celebrating the 150th birth anniversary of Mahatma Gandhi. His message of truth and non-violence is very relevant for us even today, for peace , development and progress in the world.”

The Prime Minister spoke on a wide range of global issues from the growing threat of g terrorism to environmental degradation that affect the entire world.

“We belong to a country, that has given the world, not war, but Buddha’s message of peace. And that is the reason why, our voice against terrorism, to alert the world about this evil, rings with seriousness and the outrage.
We believe, that this is one of the biggest challenges, not for any single country, but for the entire world and humanity,” the Prime Minister said.

He said the great Indian Poet Kariyan Pungun-dra-naar, who lived 3000 years ago, wrote in Tamil, the ,most ancient language of the world: “Ya-dum, Oo-ray, Yaav-rum Ke-rir,” which means We belong to all places, and to everyone. This sense of belonging beyond borders, is unique to India.”

His passionate address to the heads of the member nations against global terrorism and its perpetrators was received with great applause. The most praiseworthy part of his speech, however, was that he never mentioned any country or its leaders who enjoy unleashing terror on other countries which believe in coexistence and peace across the world.
He earnestly appealed to the member nations to formulate a global resistance against such countries.

The Prime Minister said without mentioning Pakistan, that the country “is the epicenter of terror and needs to act against terror from its soil.” “Terrorism is one of the biggest challenges before humanity,” he said.

He urged world leaders to unite and have a consensus on fighting terrorism.
“India is a great culture that is thousands of years old, a culture that has its own vibrant traditions, and which encompass universal dreams. Our values and culture see divinity in every being and strive for the inclusive welfare of all. Therefore, The very core of our approach is public welfare through public participation and this public welfare is not just for India but for the entire world. And that is the reason we draw inspiration from our motto : Collective efforts , for growth of all, with everyone’s trust (sabka sath, sabka vikas, sabka vishwas).” He said.
“All our endeavors, are centered on 1.3 billion Indians. But the dreams that these efforts are trying to fulfill, are the same dreams that the entire world has, that every country has, and that every society has. The efforts are ours, but their fruits are for all, for the entire world.” He added.

On global warming he said, “If we are to look at Per Capita Emissions, India’s role in furthering global warming has always been historically low. Yet, we have taken the lead when it comes to harnessing renewable resources. India is also at the forefront of building consensus on disaster management.”

“The face of the world is changing today. Modern technology in the 21st Century, is bringing about sweeping changes in social life, personal life, economy, security, connectivity and international relations.

In such a situation, not a fragmented world, is in the interest of no one. Neither do we have the option to confine ourselves within our boundaries.
In this new era, we will have to give new direction and energy to Multilateralism, and to the United Nations,” he said.

The Prime Minister conclude d his speech to great acceptance and applause saying, “125 years ago, the Great Spiritual Guru, Swami Vivekananda, gave this message to the world during the World Parliament of Religions in Chicago. The message was, “Harmony and Peace…. And NOT Dissension”.

Today, the message from the world’s largest democracy, for the International community is still the same: “Harmony and Peace.”