Medicinal value of porridges in Ayurveda 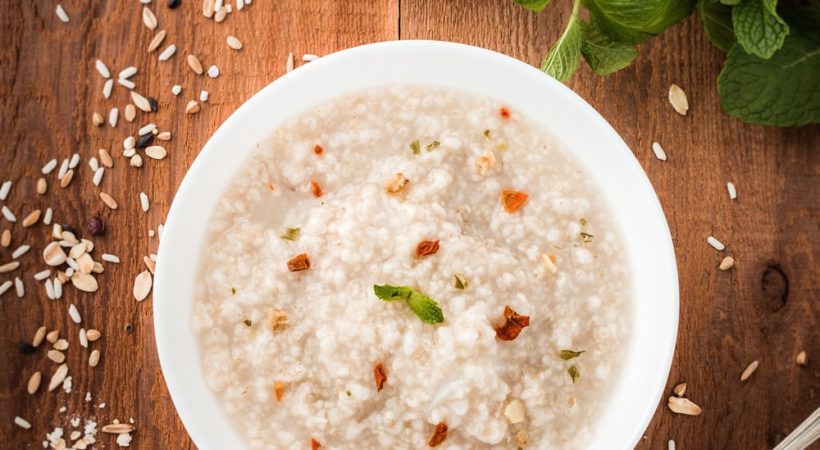 Grain porridge  is a  common nutriment all over the world,  especially in conditions wherein fever and ague are a usual occurrence. Ayurveda, the ancient  medical system of India , also has attributes a special status to porridge  as it has been used as a medicine for many ailments.

Porridges are commonly prepared of boiled rice with a lot of water . The quality of porridge changes according to the nature of the grain used in it. Different porridges have been used  in India as a nutriment as well as a medicine. All kinds of grains such as brown or white rice, barley, wheat, raagi etc., are used to prepare porridges .

In Ayurveda, while preparing porridge, the water in which the grain is boiled is called ‘Mandam’ and it has been used as an energy drink to activate the body and retain the agility after  a  tiresome work. Amongst the Mandams, a very potential one is spikelet Mandam, in which spikelet is boiled. It has more medicinal properties than the rice. This drink is also called Laja Mandam.

1. Drinking Laja Mandam is beneficial in  treating vomiting and diarrhea. Moreover, it is helpful in getting rid of fatigue and weakness.

2. Another benefit of drinking Laja Madam is that it helps alleviate dizziness and inflammation.

3. Drinking a cup of porridge water in which  spikelet is boiled can reduce overeating and it will be very beneficial for children, women and older people.

4. Those who  under went Panchakarma treatment and have  a purified body are usually served some spikelet porridge, specially prepared using sourness of pomegranate and long pepper.

Peya and its benefits:

Another porridge  prepared adding more water and less grains is Peya  as it is called in Ayurveda and it is used to reduce fever and stomach diseases. It is also beneficial in treating constipation and  getting rid of fatigue. Moreover, Peya helps to increase appetite.

People also used to make porridge  with more grains and less water. It is called Vilepi in Ayurveda . Having a small amount of Vilepi reduces over appetite and it is useful in treating diarrhea.

The most famous medicinal porridge  is Uluvakanji (Fenugreek porridge). Fenugreek  is the main ingredient in this Indian cuisine. It has been in use  for centuries and Indians owed it to Ayurveda. Known as Uluvakanji in  Malayalam , this is a dish that is used extensively in Kerala in order to boost health. According to Ayurveda, fenugreek is a health enhancing agent and has a number of qualities which make it extremely beneficial for physical health. Fenugreek  is traditionally used as an effective remedy for Arthritis and also for various ailments linked to pregnancy.

Put fenugreek in water and keep it overnight. Drain it and cook it in the morning in fresh water. Add rice to it and it should be 1/8th of the quantity of fenugreek. Add jaggery once the mixture is cooked well. For those who do not want it sweet, can add salt instead of jaggery. Prepare the gruel by cooking this mixture in coconut milk and by adding a table spoon of ghee. It is desirable that the Uluvakanji is consumed in the morning and could be even consumed instead of breakfast.

Though fenugreek improves digestion, overconsumption of the same can cause indigestion. Hence it is advised that one cup of Uluvakanji is consumed with normal food. It is also desirable that it is prepared fresh just before consumption and not prepared in advance.

Fenugreek is extremely beneficial in the treatment of fever, cold, cough, tuberculosis, piles, vomiting and loss of appetite.   It will increase body strength, and the content of agni (fire) in the body, thereby improving the proper functioning of the body. Roasted fenugreek is said to be more effective. Fenugreek can also increase the quality of blood, bone marrow, muscles and sperm.  Uluvakanji was widely used in the Malabar  region to improve production of breast milk after delivery. It also helps in healing the ovary and restoring it to the earlier state after delivery.  Anyone above the age of 30 can consume Uluvakanji. Children can also consume it but in restricted amounts.

There have been numerous medicinal porridges in use  in which herbal medicines like Thazhuthama, Poovamkunnila,Mukkootti, Vishnukranthi,Muyalchevian and Cheroola are added as ingredient.

Oushadahakanji (medicinal porridge) at the time of monsoon

As part of Monsoon treatment, Ayurveda proposes Oushadahakanji (medicinal porridge)to consume and it  is made of navara rice boiled in coconut milk or milk along with a lot of medicinal ingredients like cumin seeds, black cumin seeds, green grams, dried ginger, fenugreek, turmeric, mace, coriander, cloves and many other such medical properties. It is desirable that this porridge is consumed in empty stomach in the morning. It is better to take it continuously for a month. Yet there are many who take it for different durations. Consumption of this medicinal porridge can actually enhance the functioning of the pancreas.

Charaka, one of the principal contributors of Ayurveda had extensively researched the utility of different porridges in the treatment of many ailments and the study had been composed and recorded by himself in a chapter called Apa Marga Thanduleeyam.