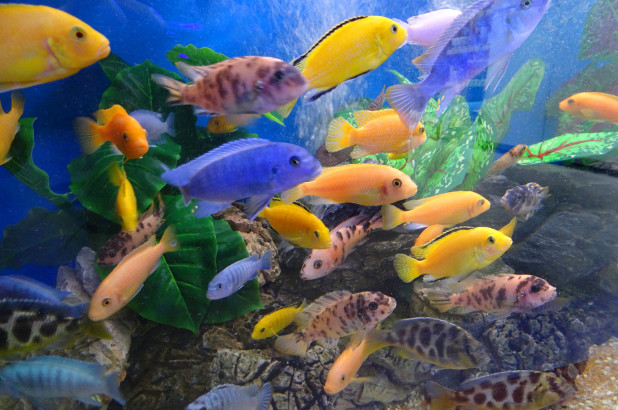 The current discovery proves an important point in evolutionary biology, say the researchers

Recently, researchers have uncovered around 40 new species of fish in a lake in Africa. They explain how this impressive number of the new varieties came to be.

There are over 34,000 recognized species of fish around the world, and they inhabit a wide range of watery habitats.

Most recently, a team of investigators from institutions across the globe — led by evolutionary biologist Joana Meier, Ph.D., from the University of Cambridge in the United Kingdom — discovered dozens of new species of predatory, freshwater fish.

In a study paper published in Nature, Meier and colleagues say that the body of water they focused on — Lake Mweru, which lies at the border between Zambia and the Democratic Republic of Congo — houses ‘a spectacular diversity’ of fish, most of which zoologists had never encountered before.

The species of fish that the researchers observed in Lake Mweru are cichlids of the family Cichlidae — a very diverse family of fish, most of which inhabit freshwater habitats.

The researchers found more than 40 previously unknown cichlid species in Lake Mweru. The scientists also studied the waters of Lake Bangweulu in Zambia but found no evidence of such striking diversity.

‘The new species of cichlids [in Lake Mewru] adapted to use all the available food resources in the lake,’ Meier observes. ‘Some,’ she notes, feed on insect larvae, others [on] zooplankton or algae. Some newly discovered fish are predators with large teeth, which we named ‘large-tooth serranchromines’.’

How did the new species evolve?

The researchers explain that most of the species present in the lake are hybrid — meaning that they are the product of inter species breeding.

Yet this is not as straightforward as it may seem. Members of different species do not typically choose to mate with each other. For interspecies breeding to occur, certain special conditions must be in place, and the females are key in this equation.

When the researchers conducted tests on cichlids in captivity, they noticed that females from one species would only choose to mate with a male from a different species if its scales were of a similar color to that of males of their species.

Additionally, the investigators saw that when visibility was poor, female cichlids were unable to differentiate between males belonging to their species and those belonging to other species, thus making interbreeding more likely.

Meier and colleagues believe that these scenarios took place around 1 million years ago at Lake Mweru’s formation.

‘To diversify into different species, the cichlid fish needed the ecological opportunity provided by the new habitats of Lake Mweru, formed 1 million years ago, which is still considered to be recent in evolutionary terms! That more than 40 species utilizing different food resources and habitats could evolve so rapidly is highly unusual,’ points out the lead researcher.

‘When Lake Mweru was formed, it combined cichlid lineages from the Congo and the Zambezi,’ Meier explains.

The cichlids from these different drainage systems then mated with each other. This,’ she hypothesizes, ‘could have been because when the lake formed, the water was very cloudy and they couldn’t see colours properly, so the females were not being as choosy about selecting a mate in their new environment.’

The team also notes that the hybrid species are so striking, in part, because they have evolved to be able to feed on different prey, as well as to colonise different habitats, such as deeper parts of Lake Mweru.

However, the investigators warn the newly discovered species’ future is uncertain, as the interspecies competition for resources may eventually lead to the extinction of some of these hybrid breeds.

Yet the current discovery, the lead researcher argues, proves an important point in evolutionary biology. ‘Our research shows that hybridisation can fuel the evolution of new species, which is a very novel finding,’ she says. Information courtesy: Medical News Today

Tags: Over 40 new species of fish found in one lake in Africa
Related -