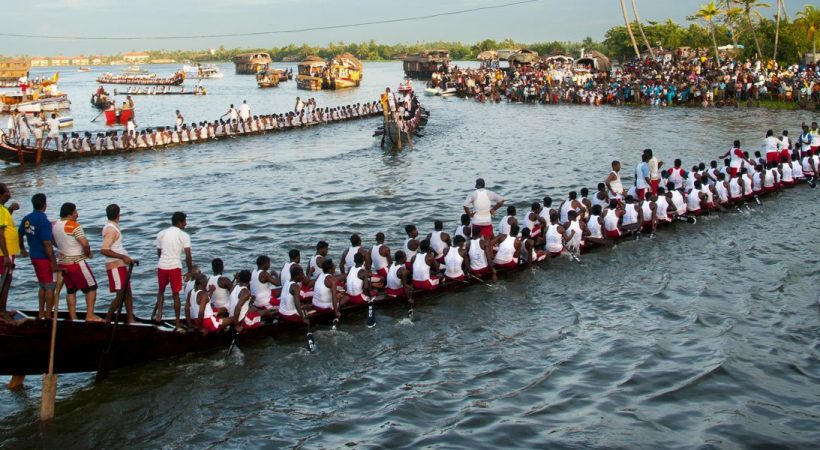 The Jawaharlal Nehru Trophy Vallamkaly (boat race) for ages has been the trigger for a heavy dose of adrenaline in the veins of the Keralites. It is a rare event wherein beauty and vigor harmoniously surge together to secure the spectator in frenzy. This year’s race has also ended on the same wavelength after Payippadan snake boat rowed by the Pallathuruthy Boat Club triumphed after defeating three snake boats in a rugged competition which concluded in the picturesque Punnamada Lake in Alappuzha in Kerala.

Mahadevikkadu Kattil Thekkethil rowed by the members of Kerala Police bagged the second position. Ayaparambu Pandi of United Boat Club, Kainakary ended up in the third position and Chambakulam rowed by NCDC Boat Club finished in the fourth position. The Pallathuruthy Boat Club members expressed their gratitude to everyone who had supported in winning the trophy which is quite a prestigious event for a boat club in Kerala. In the exhibitory race of snake boats, Madhav Valsan Vadakke Attupuram rowed by Friends Boat Club, Punnamada reached first.

Earlier, Governor P Sathasivam inaugurated the boat race. The team of Kerala Blasters (ISL), the South Indian actor Allu Arjun and his wife Sneha Reddy were also among the huge crowd who witnessed the enthralling race of the boats.

As many as 81 boats including 25 snake boats took part in the event. The entire viewers were covered under insurance by the organizers. Around 2086 police personnel were deployed, and CCTV cameras were set up in various parts of the race-course and major parts of the town. Medical team and excise squads were also active. The state water transport department operated special boats for the audience. The Fire and Rescue team which included scuba divers were deployed in the race course areas.

The Nehru Trophy Boat Race named after Pandit Jawaharlal Nehru, the first prime minister of India, is hosted on the Punnamda Lake, near Alappuzha, on the second Saturday of August every year. This year, the event got postponed due to the destructive floods that hit Kerala a couple of months ago. This Saturday witnessed the 66th year of the boat race.Almost two lakhs of people, including the tourists from abroad witnessed the event.

The first ever Nehru Boat Race was conducted in 1952 to honor Pundit Jawaharlal Nehru when the then Prime Minister visited Alappuzha.

The snake boats are the most important attraction of the event. They are around 100-138 feet in length. With the rear portion rising to a height of about 20 feet, and a long tapering front portion, it resembles a snake with its hood raised.

Traditionally each snake boat belongs to a village, and the villagers worship the boat like a deity. Only men are allowed to touch the boat, and should be barefooted when they do so. To make the boat move smoothly while in the water and to reduce the absorption of water and thereby reduce the resistance of the hull, the boat is applied with a mixture of fish oil, the ash of coconut shells, and eggs.