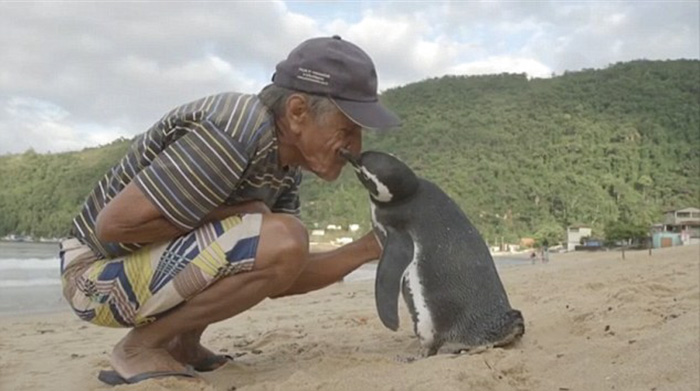 Even as we live in times when human beings are not grateful enough, we can come across animals that are grateful. This is the story of one such animal. For at least four years, a Magellanic penguin named Dindim has traveled thousands of miles from his natural habitat to spend a good chunk of the year with his best friend — a human.

Magellanic penguins spend most of the year on the Patagonian coast of South America (Argentina, Chile and the Falkland Islands), but sometimes travel as far north as Brazil to find food.

The story began in  2011 when a 71-year-old  fisherman named Joao Pereira de Souza found little Dindim on an island off the coast of Rio de Janeiro near Souza’s home. He looked completely washed up, starved and covered in oil. Souza felt pity for the animal and took him home and took care of him for a week until he got back his health.

He cleaned his tarred feathers in the shower and fed him sardines and other fishes that he caught. After he regained back all his lost health, Souza took him to a nearby island and released him into the sea. But, instead of going into the sea, the bird followed Souza back home. Later that day, Souza heard the bird squawking in his backyard.

“He wouldn’t leave,” Souza told The Independent. “He stayed with me for 11 months and then just after he changed his coat with new feathers he disappeared.”

“Everyone said he wouldn’t return but he has been coming back to visit me for the past four years. He arrives in June and leaves to go home in February and every year he becomes more affectionate as he appears even happier to see me.”

The penguin was named Dindim by Souza’s 2-year-old grandson who couldn’t pronounce the Portuguese word for penguin — pinguim.

“I have never seen anything like this before,” Biologist Joao Paulo Krajewski said. “I think the penguin believes Joao is part of his family and probably a penguin as well. When he sees him he wags his tail like a dog and honks with delight.”

Krajewski told CNN it’s unlikely the penguin is making the 3000-to-5000-mile trip to Patagonia during the 4 months he’s away each year, as his fellow penguins are farther north that time of year looking for food in warmer waters.

Also, it was noted that the 8 months Dindim spends with Souza are the same months other members of his species spend farther south breeding.

Penguins are known for their loyalty to their mates, staying with the same partner until they die. It seems Dindim has forgone this pair-bonding behavior in favor of Souza.

“I love the penguin like it’s my own child and I believe the penguin loves me,” Souza in an interview with Globo TV. “No one else is allowed to touch him. He pecks them if they do. He lays on my lap, lets me give him showers, allows me to feed him sardines and to pick him up.”

It’s typically illegal to keep wild animals as pets in Brazil, but the authorities make an exception for Souza and Dindim, as Dindim is free to go whenever he wants.