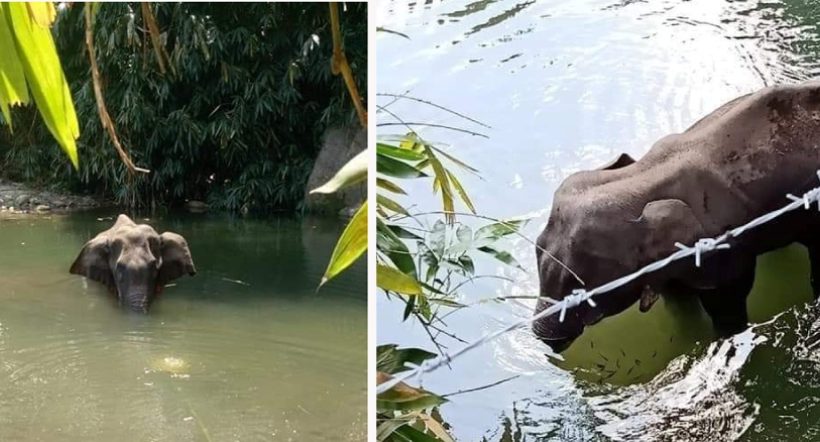 In a most inhuman act some locals of  Malappuram district, Kerala,India has killed a pregnant elephant after hiding firecrackers in a pineapple.After eating the pineapple filled with firecrackers, the elephant moved to Velliyar River and whereby died with searing pain.

According to the witnesses, even while suffering from severe pain the elephant did not show any act of violence, instead she walked around in pain.  The shocking incident has been uncovered after a forest officer in Malappuram district shared the details of the horrific incident on his Facebook page.

As per details shares on social media, the wild elephant came out of the forest, walking into a nearby village in search of food. As she walked on the streets, locals offered her the cracker-loaded pineapple. The fruit exploded in the pregnant elephant’s mouth leading her to a painful death.

According to forest officer Mohan Krishnan, who was part of the Rapid Response Team to rescue the elephant, wrote on Facebook, “She trusted everyone. When the pineapple she ate exploded, she must have been shocked not thinking about herself, but about the child, she was going to give birth to in 18 to 20 months.”

Krishnan wrote, “She didn’t harm a single human being even when she ran in burning pain on the streets of the village. She didn’t destroy a single home. This is why I said, she is full of goodness.”

Krishnan also shared photos of the elephant, who later stepped into the Velliyar River and stood there. Photos displayed her standing in the river with her mouth and trunk in water. The forest officer said she did this to get rid of flies and other insects on her wounds.

Even as forest officials brought two captive elephants to pull her out of the river, but the effort failed. After hours of attempts to rescue her, she died at 4 pm on May 27, standing in water, the forest officer said.