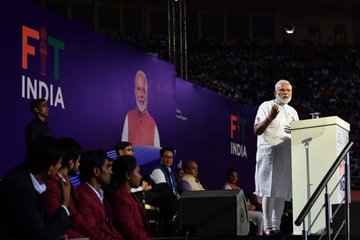 Prime Minister Narendra Modi  launched the nation-wide health programme Fit India  Movement on August 29 at the Indira Gandhi Stadium in New Delhi. The movement was launched on the occasion of the National Sports Day, which also marked the birth anniversary of the legendary hockey player Dhyan Chand.

Paying tribute to Dhyan Chand, the P M said: “ On this day a great sportsperson was born, Major Dhyan Chand, He amazed the world with his fitness, stamina and hockey stick.”

Encouraging everybody to remain healthy and fit, he said: “Fitness has always been an integral part of our culture, but there is indifference  towards fitness issues now. A few decades back, a normal person would walk 8-10 kilometres a day, do cycling or run.” Adding he said, “but, with technology, physical activity has reduced. We walk less now and the same technology tells us that we are not walking enough.”

Sports Minister Kiren Rijiju, who attended the launch said, “We will take this movement to new heights with the cooperation  of my fellow Indians. I am glad that this movement is being launched on the birth anniversary of Major Dhyan Chand , our hockey wizard.”

The Prime Minister congratulated the winners of  National Sports Awards 2019 , who gathered at the  stadium to witness the launch of Fit India and take part in the National Sports Day celebrations.

“Be it boxing, badminton, tennis or any sport, our athletes are giving new wings to our aspirations. Their medals are not just a result of their hard work but also a reflection of a new India’s confidence,”  The PM said.

The PM  has also administered a fitness pledge on the occasion.