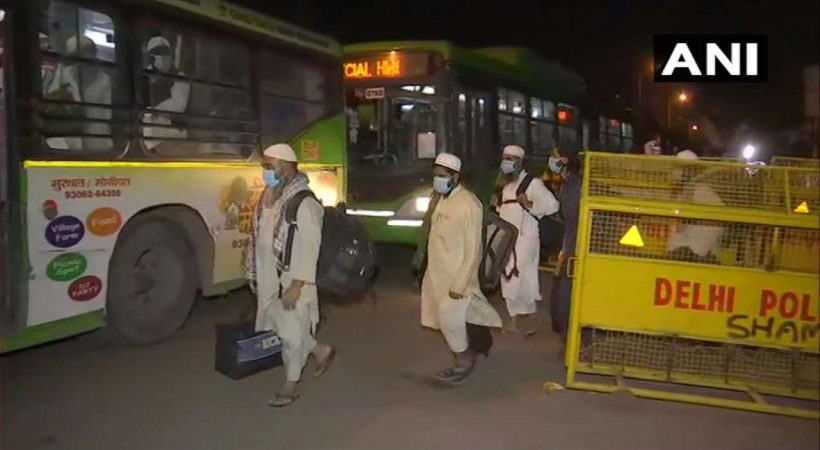 Six people are reported to have died after participating in a religious congregation in Delhi’s Nizamuddin area, revealed the Telangana government. This congregation of Tablighi Jamaat, a Muslim religious organization took place from March 1 – 15 in the Nizamuddin West area in Delhi and was attended by over 2000 delegates, including those from Indonesia and Malaysia.

According to the locals, a large number of people continued to stay here at the Jamaat’s ‘Markaj’ (Center) even after the congregation was over. The six persons who were declared dead had also attended the congregation from where they are believed to have contracted the virus.  Of the six, two died at the Gandhi Hospital and one each at the Apollo Hospital and Global Hospital in Hyderabad.

Two others died in the Nizamabad and Gadwal districts respectively. Nine more people who attended the congregation have tested positive for the coronavirus in Andaman. Another person, who is a relative of one of the nine persons, too, had tested positive for Covid-19. Also, likely suspects to be infected by the virus confirmed by the special teams of the Telangana government have been rushed to the hospitals. These are now being tested currently for Covid-19. The Telangana government has also requested all who visited Delhi to approach health facilities near them immediately and get themselves tested.

Andhra MLA, Shaik Mohammad Mustafa, along with 14 others, have put themselves under quarantine after a relative of the MLA has been tested positive for Covid-19. This relative is known to have visited Delhi and also participated in the religious congregation at Nizamuddin. Three other people, who were identified as his close contact, too were also tested positive. Meanwhile, according to sources, six out of the 14 persons who were put under quarantine, which includes Guntur (East) MLA, Mustafa have already developed symptoms. However, all are waiting for the final test results from the GGH Vijayawada lab.

Over 200 people have been kept in isolation in hospitals after several people who took part in a religious congregation in Delhi earlier this month showed symptoms of coronavirus. According to officials, in view of this, the Delhi police and paramilitary personnel have cordoned off a major area in Nizamuddin West in south Delhi. According to sources, Delhi Chief Minister, Arvind Kejriwal ordered an FIR against the cleric who led the congregation. On late Sunday night, the Delhi Police, CRPF officials and medical teams visited the locality after reports that a large number of people here were showing symptoms of the disease. Police Joint Commissioner (Southern Range) Devesh Srivastava, said that around 300-400 people had taken part in the congregation.

“We have isolated the Markaj building (of Tabligh-e-Jamaat) from the rest of the area where the gathering had taken place. We are assisting the health department in taking out people for check-ups,” Srivastava said. According to another senior police official, a notice has been served to the organization for violating prohibitory orders and restrictions imposed owing to the lockdown to contain the spread of coronavirus.

Earlier this month, the Delhi Government had banned religious, social, cultural and political gatherings as well as protests comprising more than 50 people till March 31 in view of the coronavirus outbreak. In view of this incident, the entire area, which includes residences and the headquarters of the Tabligh-e-Jamaat, has been cordoned off.

The joint Delhi Police-CRPF-medical team has been checking people and shifting them to designated hospitals for quarantining, if needed, the officials said. The police are using drones for surveillance in order to check any more violations. Right now, buses are kept ready for shifting people to quarantine centers. Hotels in the area too that had housed people from the congregation have been sealed. Alarm bells started to ring after a man in his 60s who had attended the congregation succumbed to COVID-19 in Srinagar last week.

According to officials, there were several smaller congregations culminating in the big meeting at the headquarters of the organization which shares its wall with the Nizamuddin police station and is adjacent to the famous shrine of Khwaja Nizamuddin Auliya.

Preachers from several countries, including Saudi Arabia, Indonesia, Dubai, Uzbekistan and Malaysia attended the congregation. Also, 600 Indians from different parts of the country is also known to have participated in the congregation. The Indians of the group is known to have left on trains and flights. Contacts of a few cases that were identified in several parts of the country were traced to the congregation, the officials said. Nearly 30,000 people reside in Nizamuddin west and Nizamuddin Basti area.

A nationwide lockdown was imposed on the movement of people for 21 days from Wednesday to prevent the spread of the novel coronavirus.