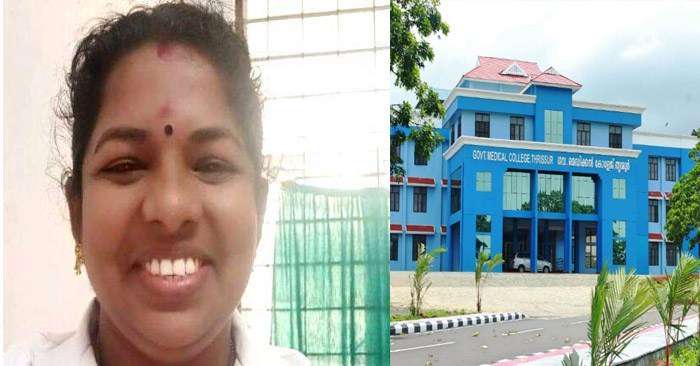 It was pm on January 30. The scene was the Thrissur Medical College Hospital. All staff at the hospital was in an unusual mood. They all seemed active and very alert. They were also very busy and had no time to exchange smiles or a hand shake. It was the time when the first patient in India was tested positive for Corona. The patient was in the Thrissur General Hospital. Within hours, she had to be shifted to the isolation ward of the medical college hospital. The authorities of the hospital received orders regarding the shifting of the patient and the treatment procedures.

The isolation ward needed to be prepared soon. The order was that it should be well-equipped with all facilities including a telephone. The staff for the ward should also be identified immediately. The hospital was getting ready to face the epidemic called corona. On one hand, the pay ward was evacuated and an isolation ward was getting ready like those in the times of war. On the other hand, the details of the staff to be associated with this ward were being prepared. The new list should include everyone from a doctor to a sweeper.

By 7 pm, the isolation ward as well as the staff to go with it was ready. The staff included 30 nurses and a number of doctors too. The only thing missing now was the patient. In the meantime, the hospital faced a lot of issues especially from the public who aired out their anxieties. Some of the other patients got prepared to leave the hospital for fear of getting infected with the coronavirus.  Also, a few people who were on their way to the hospital for treating other diseases returned home half-way when they realized that the hospital was treating a corona infected person. By evening the OP and IP center of the medical college hospital wore a deserted look.

At this time it is interesting to note that a person ran to the head nurse of the core team formed for managing the coronavirus, to ask if she too could be made part of the team and that she was ready for it. She was Sandhya Jalesh, staff nurse of the Chest Hospital. The head nurse asked her to go back and told her that the current team already had 30 nurses who were willing to work continuously for 15 days without taking even a day’s leave. The head nurse, however did not disappoint her, but told her that she will be definitely considered for the next team. Sandhya returned home with hope that she would be part of this team some other time. She was part of the treatment team at the Thrissur Medical College when Nipah was reported in the district in 2019.

What helped me to be a part of this team was the knowledge that the coronavirus treatment team had a nurse that had a child that was barely one-year-old. I took this as an opportunity and requested authorities to replace me with the new mother. I decided to let the authorities know that I was interested in taking up this role. Finally, the medical team accepted my request. But, by then, it was 3 to 4 days since the infected had reached the hospital. The medical team was given the following instructions:-

These were some of the instructions given to the team that would take care of the corona patients. The conditions given were tougher than expected. All medical team members were required to wear the PPE kit before entering the isolation ward. After the patient was examined and given the appropriate medicines, the staff was allowed to leave the ward after burning the PPE kit in the designated area. After that, the person was required to bathe using disinfectants before leaving the ward. It is only after all these procedures that the person was allowed to move to his/her home or residence.

During my breaks, the doctors examined me too to check if I’m infected since I have been dealing with these patients. Thus, I too came under observation since I was part of the team that was treating the coronavirus infected patients. It is only later that I understood that all those who were associated with the isolation ward were under observation too. I also understood that there was a long surveillance chain behind the eradication of this virus. The surveillance was to stop the spread of the virus in a chain manner from one person to the other. The treatment team was allowed to go home only after the patient’s disease status was negative. But, even after this, the health department continued with their surveillance. The families of the treatment team who returned home was also under strict surveillance so as to understand if any of their close contacts got hold of the disease.

What motivated me to work in this isolation ward was the thought that ‘if this happened to my own daughter’. The first corona-infected child in the isolation ward had to wear the PPE kit all the time, initially. It was only after two consecutive negative reports that she was allowed to use just the mask. This first patient from a village and she was innocent, talkative and friendly. What was noticeable of her was that she used to complain immediately in case there was no Wi-Fi connection. This was all about the first patient in the corona ward who was tested positive for the virus.

The several other nurses in this ward were much more dedicated than me. I realized that I was nothing in their presence. I hope these experiences will allow and motivate you to live free without any fear of the disease. That is all what I meant to do with this post.

( Sandhya Jalesh has been a staff nurse at the Medical College Hospital, Thrissur for the past 3.5 years. After work hours she involves in a lot of literary work. So far, she has written two novels that were published. Her novel – mazha meghanghale kathu, received the 2017’s North Kerala Poetry and Literary Forum’s Madhavikutty Award. Her husband is Jalesh and the couple has two kids – Lakshmi, Amarnath.)