Today is Vijayadashami and Vidhyarambham in Kerala 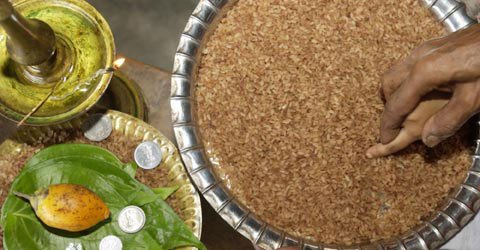 The celebration of Navratri (Nine nights) a 10-day festival  seeking blessings of Aadi Parashakti, (the Supreme Goddess Shaki), which began  on September 30 ends on Vijayadashami day (Victory Day) on October 8. Considered victory of the good over evil , the festival is  celebrated across India in honour of the nine different forms of Goddess Shakti with extreme devotion, fervour and enthusiasm. Goddess Shakti is worshipped  in the forms of Durga, Bhadrakali, Amba, Annapoorna Devi, Sarvamangala, Bhairavi, Chandika, Lalita, Bhavani and Mookambika during these  days.

The festival  of Navratri is an opportunity for  performing different forms of art and culture, devotional  music, dance and drama. The only difference, however, is the festival has the flavor of the regions where it is being conducted.

In Kerala, the festival is centred mostly  around temples, where special poojas are offered and different forms of traditional music, dance and drama are performed  in the nights.

On the eighth day,   the day of Durgashatami,  children take their books to the temple and place there for special pooja  for blessings of Goddess Durga in the form of Saraswathi, the Goddess of Knowledge. The blessed books are taken back on the third day, the Vijayadashami day.

Vijayadashami is very important in Kerala as it is considered the most auspicious day for a good  beginning in life, especially education. Hence Vijayadashami is also called the Vidhyarambham Day here.  Thousands of small children, aged two or three are taken to the village guru (Ashaan), or temples. The guru,  grandfather, father, most elederly in the family or the priest of the temple initiates the child to education by writing Hari, Shree Ganapathaye Namaha, ( prayers to Lord Vishnu, the Omnipotent, Goddess Saraswathi, Goddess of Knowledge and  Lord Ganapathi (for no obstacles during education and life) on the tongue with a gold ring and in rice on a plate with the child’s right  index finger. The guru also offers sweets to the child.

Shree Mookambika Temple in Kollur, Karnataka is the most sought-after  Saraswathi temple for the beginning of education. Thousands of people from different parts of India and abroad crowd the shrine on  this auspicious day to introduce their children to the world of letters and knowledge. All temples in Kerala have facilities for this precious event.

Vidhyarambham is unique to Keralites irrespective of their belief. Even Christians respect this day as a holy day for the beginning of education and perform Vidhyarambham at churches. Some media houses also make facilities for Vidhyarambham with gurus ,  drawn from well known academicians, writers, editors etc.

People  of Tamil Nadu celebrate Navratri in a different way.  Beautiful dolls (Bomma) of various gods and goddesses  are arranged on wooden steps made specially for this purpose  and offer prayers to Goddesses Shakti, Lakshmi and Saraswathi. Neighbours visit  each others’ houses to see Bomma Kolu and exchange gifts.

It is called Durga pooja in Bengal  and beautiful pandals are erected on streets for  the worship of Goddess Durga. Huge idols of Durga slaying  the demon buffalo Mahishasura is placed in the pandal and worshipped for five days and on Vijayadashami Day, which is called Dussehra here,  the idol is immersed in the river.

Other Eastern and North-eastern states are also celebrating Navratri as Durga Pooja, same as in Bengal.

In Gujarat and Maharashtra, it is time for the famous  Garba dance during Navratri. Done in a circle with a clay lantern at the centre, the songs and dances are a great spectacle indeed. .

In the North and West, the scenario changes as Navratri  or Dussehra is celebrated over the victory of Lord Rama over the demon king Ravana.  In all nine nights, there is Ramleela, a play based on Ramayan. Huge effigies of Ravana are built and on  Vijayadashami day they are set on fire.

In Bihar, the festivities are held at local temples.  There are also big fairs during these days where pottery, handicrafts, dress items and  household items are exhibited.. ..

It is Dasara in Mysore, Karnataka and the 10th day  is celebrated as Vijayadashami, marking the victory of good over evil as it  was on this day that Goddess Chamundeshwari (Durga) killed the demon Mahishasura. The  majestic Mysore Palace is beautifully decorated and illuminated. Another attraction on this day is the  colourful and grand procession with caparisoned elephants moving slowly to the rhythm of drums and music.

What is amazing is, whatever way it is  being held, the celebration of Navratri and Vijayadashami  across the country is over the victory of good over evil.

Tags: Today is Vijayadashami and Vidhyarambham in Kerala
Related -