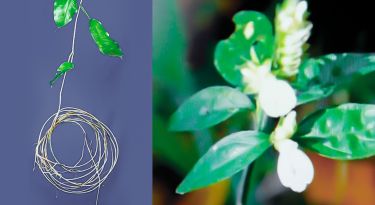 Kozhikode: Two more new plants found in the western ghats have been added to the list of biodiversity plants. These have been discovered by researchers of the Jawaharlal Nehru Tropical Botanical Garden and Research Institute, Trivandrum from Valayar in Idukki and from the Coimbatore Anamala Tiger Reserve.
One of the plants was discovered from the evergreen forests of Valarayil which is close to Idukki and Adimali. This belongs to the Aracia family. This plant is seen to be growing on other trees and plants. Its scientific name is Pothos boisense.
There are over 70 different types of plants in the world that belongs to the Pothos family. In India, 11 such plants that belongs to this family has been reported. Out of this, six plants are found in the western ghats. The new species is found only in the Valarayil region. Since this is a rare species that is facing extinction it needs to be preserved. This has been quoted by Dr. A Nasurudeen, one of the doctors of the research team.
This species of plant is grown in the botanical garden in Trivandrum and can be reproduced by tissue culture methods. The research results were published in an international scientific journal called Taiwaniyayil.
Another plant belonging to the Acandesia (kurunji) family has been found in the Anamala forest close to Valppara. It was understood that the earlier reported shrub (Rukkiya Lattiyar Var) is a new species that has been discovered from a study on plants conducted by researchers of the botanical garden.
Rukkiya anamalayana is the scientific name of this new species. Out of the 15 Runkiya plants found in India, 9 are from Tamil Nadu. Out of the nine, four are found in Anamalai. These have been placed in the red list of species that are facing extinction by the IUCN. The study has been published in the international publication called – Plant Science Today.
The other researchers that belongs to this team are G Rajkumar, Rohit Mathew Mohan, T Shaju and R Prakashkumar.
Tags: Two new plants discovered in the western ghats
Related -